Yoga: The Blessing of God to Mankind!

No Widgets found in the Sidebar Alt!

No Widgets found in the Sidebar Alt!

Around the world, there are countless megalithic structures like Stone Henge, Avebury, Carnaac in France, and temples in Peru dating back over 3000 years, all linking to the Winter and Summer solstice. The word ‘solstice’ translates as ‘sun standing still’, from the Latin sōlstitium, (sol means ‘sun’ and ‘stitium’ means ‘to stand still’) – and as a side note, we can see how much the ancient Sanskrit language has influenced even Latin, with the Sanskrit word ‘sthiti’ referring to standing still.

Exactly why these ancient temples and sites were built is an ongoing controversial discussion, but the fact that so much effort and energy was put into creating these incredible structures implies that humans have long had a fascination with and yearning connection to the sun. We now know that ancient civilisations were probably far more advanced than history has given credit, and their knowledge of astronomy, herbology, science and spirituality is still being unearthed and re-discovered today. Thanks to our ancient ancestors, we have specific places around the world we can travel to on these special solstice days, but if you’re staying home this solstice (as many of us have been doing for much of 2020 already!) there are some powerful and meaningful ways of invoking the energy of the sun, and cultivating your own solstice rituals. Read on for a few ideas on how to celebrate the Summer solstice this year.

Rise with the sun

Aligning the body’s internal ‘clock’ with the rhythms of nature is one of the best things we can do to cultivate a healthier and more harmonious life. As humans, we evolved to live according to the sun – waking around sunrise and heading to bed close to sunset, shifting with the seasons. The Ayurvedic wellbeing system reasons that each part of the day holds a different energy, and waking either just before or with the sunrise balances our circadian rhythms. Waking early also allows us to awaken at a time of day that has ‘light’ energy, promoting good energy levels and a clear mind for the rest of the day. Historically, communities that observe the solstice have either risen with the sun on this special day, or even more commonly, have stayed awake all night to be there for the first light.

The ancient Vedas (yogic texts) weren’t just for reading – they were full of hymns and rituals to be recited and practiced too. The Sanskrit language used throughout these texts is said to be ‘vibrational’, meaning the tone and rhythm of the words produces specific waves of energy. The Gayatri Mantra is one of the most powerful and widely chanted mantras, invoking Gayatri, the deity of the five elements, and Savitr, a form of the sun deity. In the ancient Rigveda texts, this is one of the most highly revered hymns:

‘The eternal, earth, air, heaven
That glory, that resplendence of the sun
May we contemplate the brilliance of that light
May the sun inspire our minds’

Whilst many modern forms of Surya Namaskar look very different to the original practice (the most ancient form of the ‘sun salutation’ involved ‘sun gazing’; gazing towards a rising or setting sun, or performing rituals to thank the sun deities for the gift of life), the intention of the practice remains just as powerful. As you awaken this Summer solstice morning, practice a few rounds of Surya Namaskar, perhaps making it a practice of gratitude for the sun as the giver of life by thinking of one thing about your life you’re grateful for at the beginning of each round.

For the Pagan community, gathering ‘above ground’ seasonal herbs and flowers is a Summer solstice tradition, as the plants are said to hold the strongest amount of energy at this time of the year. Traditional herbs to collect are classic Summer plants like Chamomile, Rosemary, St, John’s Wort, Lavender Fennel and Thyme. These can be used in cooking, made into teas, or soaked in vodka, glycerine, or vinegar for around 6 weeks to create a tincture.

Many pranayama practices are used to invoke different elements and planets, specifically the more ‘masculine’ and fiery qualities of the sun, and the ‘feminine’ cooling qualities of the moon. To awaken the sun side of your energy, practice Surya Bhedana (sun – activating breath) by closing off your left nostril and inhaling through the right, then closing the right nostril and exhaling through the left. Repeat this for 5 minutes to enhance the qualities of fire, heat, and sun energy within your mind and body.

Mudras can also be used to enhance specific energies or feelings within us, and by practicing Ushas mudra, we invite in the Goddess of dawn and new beginnings, driving away oppressive darkness and welcoming in the light. Ushas is repeatedly mentioned in the Vedas, and there are many hymns devoted to her.

To practice Ushas mudra, interlace the fingers so that the palms are facing your body, and the thumb tips are touching. For males, it’s traditional to place the right thumb on top, and for females the left. Rest your hands in your lap and visualise a dawn sky, peace, quietness and the hint of a rising sun. As you visualise this, begin to bring into your awareness positive changes you want to make in your life. See yourself living and feeling how you want to live. Make the images in your mind as vibrant and realistic as you can. Either silently or out loud, chant the mantra Om Ushase Namaha to invoke Ushas’ energy.

Bring In Light To Overcome Your Darkness

The Summer solstice is a visual representation of the concept of ‘light overcoming darkness’ so often spoken of in ancient yogic texts. As we see the sun rising this solstice, we receive an opportunity to reflect upon any negativity, or ‘darkness’ within our lives, and make the choice to invite the ‘light’ of love, courage and positivity to overcome it. Perhaps journal about the things you wish to remove from your life, followed by the positivity you’ll bring in. The mantra Asato Ma is a powerful mantra to chant as a regular reminder to move towards the light of truth, and away from the darkness of ignorance:

‘Lead me from the unreal to the real

From darkness to light

From death to immortality 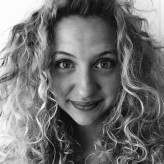 Emma is a 500hr qualified Yoga teacher, musician, massage therapist, cook, and writer. Having grown up surrounded by Yoga and meditation, Emma began her practice at a young age and has continued to study and develop her understanding of Yoga on a daily basis. Training internationally with inspirational teachers, Emma’s passions now lie primarily in philosophy and Yoga off the mat. Emma currently teaches regularly in Sussex, co-leading teacher trainings, retreats, workshops and kirtans, and also manages the Brighton Yoga Festival.

7 Poses for a Fun Foundational Flow